Air strike in Syria a warning to Iran: Biden 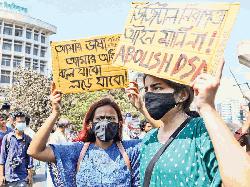 Mushtaq’s death: Protests rage on in city for 2nd day