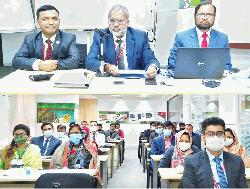 PIA to bring back its plane from Malaysia soon: Minister

Tata in talks to launch Moderna Covid-19 vaccine in India