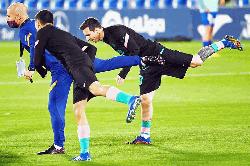 Indian star pulls out of Murali's biopic after outcry

BCB President's Cup should be organised every year: Mahmud

T20 tournament likely to be held without foreign players