Sifat gets bail, whisked away by plainclothesmen from jail gate 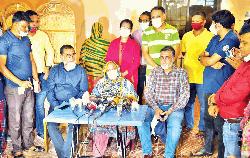