Six out of seven accused get bail 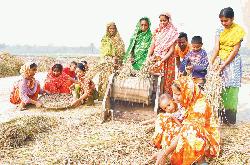 International Women’s Day: Women are not lagging behind their male counterparts