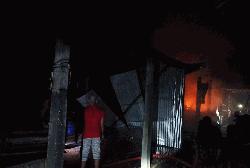 Couple among 3 die with corona symptoms in Noakhali

Drugs worth Tk 10.5cr recovered in Cox’s Bazar in May 23 more infected with coornavirus in Noakhali