Khaleda can apply for parole only after acknowledging crimes: Hasan

No drug can enter or go out of India: Amit Shah 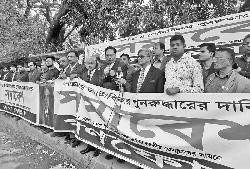